The United States and China: Competition for superiority in space to protect resources and weapon systems

The reason why the New Cold War in space is inevitable

The space race between the U.S. and China is not just a number fight. How many satellites and spaceships have been launched and how many space stations have been established are the questions that mattered in the past. These mattered for the convenience and benefit for mankind. It could also make possible for some of the curiosity about the universe to be solved. However, starting the 21st century, the space race between the U.S. and China has progressed into an intense, high-level strategic battle.

Whoever rules space rules the future

There is one reason why the two countries' space strategy competition will inevitably lead to a hegemony competition. This is because they try to conquer the space order. Conquering the space order is to define and establish the space order. Those who dominate space will dominate almost all sectors of the future world, including economy, technology, environment, cyberspace, transportation and energy. That's why the United States is considered as a hegemonic country on Earth today. The U.S. is recognized as a hegemonic country because it establishes and leads the economic, financial, trade, political, and diplomatic order.

The Communist Party of China recognized this early on. At the 19th National Communist Party Congress in 2017, it expressed its justification for establishing space order. President Xi Jinping declared that China's diplomatic stage in the 21st century has expanded beyond the Earth into space and virtual space. It was the moment when China defined the concept of diplomatic space as the "universe" beyond the Earth.

He then explained that the establishment of a system that can even manage the order of the universe and the virtual world eventually means the establishment of practical governance. Therefore, he justified that China's diplomatic horizon has no choice but to expand into space. Furthermore, he stressed that he is confident that the ideation of building such governance serves as the foundation for the community of common destiny for mankind which China pursues. In other words, he publicly urged China to have the capabilities and means to become a key country in building governance in these two areas.

This led the Trump administration to spare no effort to develop space science and technology and space projects, which are the basis of space order. Since President George W. Bush, the maintenance work for supremacy in space has been carried out. President Obama also introduced a policy to encourage U.S. private companies to participate in space projects to expand the foundation for supremacy in space. 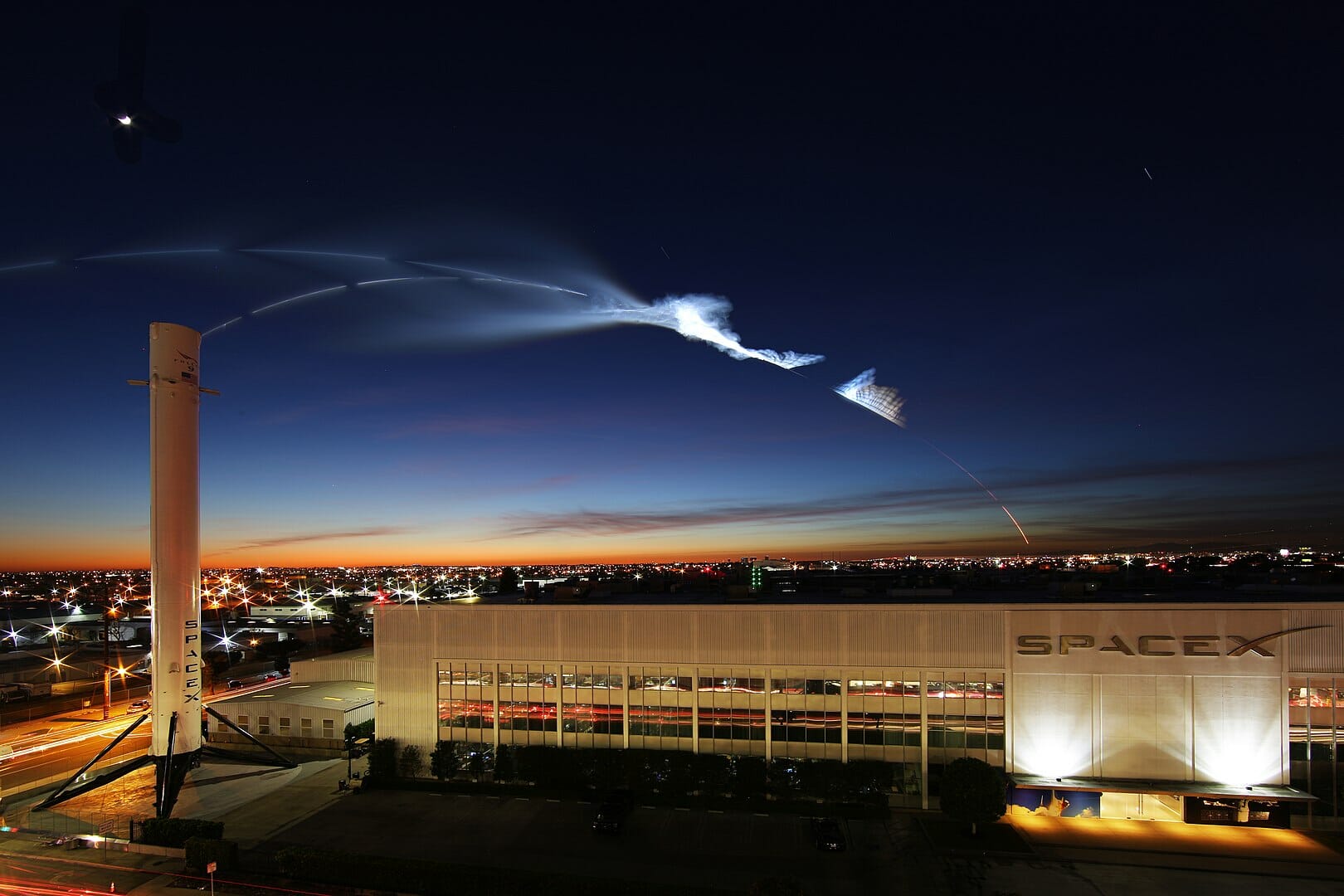 The headquarters of Space Exploration Technologies Corp. (SpaceX), an American company; plumes from a flight of a Falcon 9 rocket are visible overhead.

It was President Trump who actualized all these. He was the one who legalized private companies' space development projects under the Space Policy Directive-I. He also thoroughly reflected his “America First” principle in the space business. For example, all the substances obtained in space, including minerals, were no longer defined as "common goods." He also promised that space activities by private companies in the United States would be free from restrictions such as the Outer Space Treaty and the 1979 resolution by the United Nations Committee on the Peaceful Uses of Outer Space.

Space and the moon were known as repositories of resources. As it became known that the resources that are scarce or will be depleted on Earth are very abundant outside the Earth in space, the space race has gotten intense. This is why the space race has been promoted on a geoeconomic level. However, in order to secure these benefits of geoeconomic strategies, geopolitical strategies must be accompanied. In other words, military defenses should be backed up to protect the resource acquisition process.

Fearing this, the United Nations Committee on the Peaceful Uses of Outer Space strictly regulates the military use of space. However, the fact that the logic of developing naval power to protect long-range foreign interests on Earth is reflected in the strategic thinking of securing space profits is the decisive factor that has driven the space race today.

The repositories of resources and future energy sources

There are three strategic benefits that drive the U.S.-China competition for supremacy in space. The first is the infinite resource in space. There are endless resources buried in more than 10,000 asteroids orbiting the Earth. They are known to have an abundance of resources such as carbon, zinc, cobalt, platinum, gold, silver and titanium, in which platinum and titanium, for example, can be sold for $30,000 to $50,000 per kilogram.

Second, the future energy source lies in space. Power supply using solar energy will be possible by establishing a space power plant that concentrates solar energy in the Earth-Moon area and transmitting it to Earth through laser beams. Here, the supplied solar power is known to be 35 to 70% more powerful than the solar energy on Earth. By 2100, 70 terawatts of energy will be needed, and it is expected that 332 terawatts can be supplied through the development of space solar power plants in a geostationary orbit.

Third, the desire to dominate space for hegemony has established the space competition relationship between the U.S. and China. Although each started from different strategic interests, in the end, they have one common goal.

First of all, China wants to be free from the U.S. GPS system. This is because only through the freedom China can prevent its future weapons system from becoming vulnerable to U.S. control and restrictions. It is planning to achieve its goal of establishing a so-called "Space Silk Road" by expanding China's "BeiDou" navigation system to the regions within One Belt One Road and the national satellite and communication systems. The U.S. also plans to spend $25 billion to develop GPS3 systems with stronger defense capabilities against Chinese space and cyberattacks, by 2025.

The competition between the U.S. and China to establish a space station in order to secure the benefits from space strategies is inevitable. This is because a space station is the foundation for establishing space order. As the space station has the purpose of protecting and defending from enemies, militarization is inevitable in the process. It is clear that the outcome will lead to a space arms race. This is why the competition over supremacy in space between the U.S. and China has the aspects of the New Cold War outside the Earth.

Space is a blue ocean. It is a world without order. Preemption is therefore important. In order to prepare space order and accompanying laws, norms, and systems, the U.S. and China have been engaged in a fierce battle through space projects. This is because space is the decisive factor in the operation of energy, resources, environment, communication, and advanced military weapons systems in the future. Space is no longer a dream world.

Of course, it takes a lot of time for these strategic benefits to become a reality. However, the Fourth Industrial Revolution and the development of AI (Artificial Intelligence) technology will speed up the pace. This is because economic problems can be solved if spacecraft recycling is made possible with the participation of private companies and facilities related to space stations and mineral mining equipment are set up with 3D printers.

The space race between the U.S. and China also has important implications for the national interests of South Korea. The South Korean Government announced its plan to invest $23 billion (23 trillion KRW) into solar power generation to secure clean energy. It is equivalent to the NASA budget of 21 billion U.S. dollars. This can also be a significant investment for private companies in the U.S.

Hence, it is necessary to upgrade the Korea-U.S. alliance in the face of the space competition. The Korea-U.S. alliance should be utilized strategically for South Korea to protect its satellites and satellite weapons systems and secure eco-friendly energy sources in space. To do so, there is an urgency to expand Korea's diplomatic capabilities to space beyond the Earth.

China lander touches down on Mars

The U.S.-China space strategy competition started with the U.S. firearms introduced in the 2001 Afghanistan War and the 2003 Iraq War. The weapon system, such as cruise missiles operated by GPS, showed high precision strike capabilities. GPS operates, relying on satellites. The best defense for such firearms is to destroy satellites, or block or disrupt GPS transmission. China showed its defense capability of striking satellites in 2007. Since then, China's space science technology has been improving.

In 2003, the Chinese manned spaceflight Shenzhou 5 succeeded in returning. In 2011, the Tiangong spacecraft successfully docked in space. In 2016, the manned spaceflight Shenzhou 11 docked with the Tiangong spacecraft, taking its first step toward the establishment of a space station. In 2019, China succeeded in landing on the moon's back surface for the first time.

Following a successful launch of the spacecraft to Mars, and according to a state media announcement on Saturday 15 May, 2021, China set down the six-wheeled Zhurong robot on the planet. The successful touchdown is a remarkable achievement, given the difficulties, and until now, only the Americans have really mastered landing on Mars. All other countries that have tried have either crashed or lost contact soon after reaching the surface.

"Conquering the space order is to define and establish the space order. Those who dominate space will dominate almost all sectors of the future world, including economy, technology, environment, cyberspace, transportation and energy."