The Caution of Collective Memory: Why Japan’s 1947 Constitution is Worth Fighting for

With the 3/11 disaster, Fukushima nuclear crisis and a limping economy all at its back, Japan’s crisis timeline could never have been worse since the end of World War II. Needless to say, winning the bid for 2020 Olympics ought to give the people its much-needed rejuvenated sense of national pride. Although the government is optimistic about potential economic gains, Japan’s history tells us that hosting the Olympics is more than just rebuilding the economy. When Tokyo hosted the games in 1964 for the first time, it ushered the country’s acceptance in the international community as a pacifist, democratic state. It was a renunciation of an atrocious past to give way to a renewed image.

Forty-nine years later, disputes regarding its wartime conduct and historical interpretation still remain. The ruling Liberal Democratic Party (LDP) must confront these issues prudently. It should take constitutional revision, re-militarization and denial of wartime brutalities with a grain of salt. Otherwise, it risks losing the opportunity of reviving the 1964 emboldened spirit in 2020.

Could it be that hosting the Olympics serves as a proper judge of the state’s ability to re-align its position in international relations as a pacifist state, if only to relive the prestige of the past and give the current generation a surge of optimism for the future?

The Japanese decision to adopt the so-called ‘Peace Constitution’ in 1947 began a long process of creating a collective memory for a ‘post-war Japan’. This historical milestone has since provided the mould that would change how Japanese citizens and the rest of the world perceive Japan: from a militaristic to a peace-loving state. Yet, critics of the 1947 Constitution claim that the country should seriously consider revising to adapt to the changing demands of both domestic and international politics.

The heart of this contention lies in the Article 9, which renounces the state’s sovereign right to use force and engage in war, thereby prohibiting the country’s Self-Defense Forces (SDF) from collective security measures. As if to prove the anachronistic nature of this provision, the LDP has consistently rallied against retaining it since 1955. Disputes include the question of Emperor Hirohito’s war guilt, Japan’s right to self-determination and its overall role in international security. Recent examples would be Prime Minister Jun’ichiro Koizumi’s visits to the Yasukuni Shrine, his decision to deploy the SDF in Iraq in 2004 and current Prime Minister Shinzo Abe’s convening of the advisory panel to discuss lifting the ban on Japan’s self-defence right.

Even with LDP’s stance, war-renouncing Article 9 has enjoyed a fair acceptance from the international community, particularly from the neighbouring countries of South Korea and China, who look at the peace provision as an apology for “the Asian Holocaust” committed by the Japanese Imperial army during the war. After the Cold War, however, there was an increased pressure for Japan to play a more active role in international security. This clearly creates tension between the opposition and defenders of Article 9, which is considered as the most influential section of the 1947 Constitution. 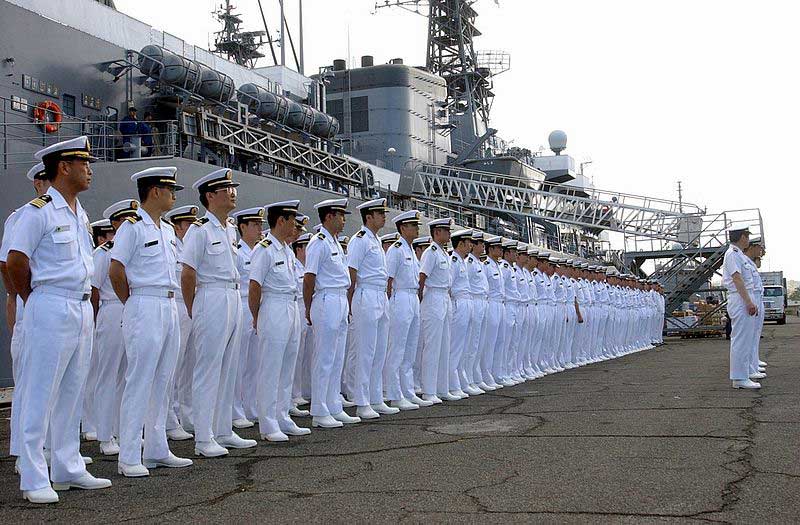 Sailors of the Japanese Maritime Self-Defense Force, one of the de facto military forces ostensibly permitted under Article 9

The Contest over Article 9

There are two arguments lodged for constitutional revision: First is the view that revision is an imperative response to the changing international political environment, especially with security threats from China and North Korea. According to Richard Samuels, the nationalists who seek for ‘normality’ in terms of assuming a political role in international relations, argue that the ‘statute of limitations for Japan’s mid-twentieth-century aggression expired long ago’. Equating normality to militarism,  the move to revise Article 9 can be assumed as bereft of any kind of politicized decision-making from the LDP because to choose otherwise would render Japan anomalous.

The second comes from those seeking for full sovereignty: this view holds that 1947 Constitution’s is an American-manufactured document forced on Japan during occupation (1945-1952). That being the case, it is time for Japan to detach itself from the political goals of the United States and assume the sole responsibility of deciding for its own security, especially now that Japan is an economic power. This would, of course, have huge implications with the US-Japan Security Treaty of 1952. It is possible that a Japan with a strong military and the right to full sovereignty would rethink American use of bases in Okinawa, for example. Based on these, the Japanese government thus appears to have the dual roles of an agent willing to sacrifice its long-standing post-war pacifist personality for the sake of adjusting to the international situation in the former, and a precursor of the long-sought independence of Japan from the US in the latter.

On the other side of the fence, those who oppose changes in the constitution appear to be the silent majority compared to the political power the LDP has as the ruling party. While the Democratic Party of Japan (DPJ) has yet to communicate their stance on Article 9, the New Komeito’s chairman, Natsuo Yamaguchi announced the party’s willingness to act as a counterweight to the LDP if it endangers the peace clause of the 1947 Constitution. Whether they are using Article 9 for political purposes or not, this view reflects the popular sentiment that sees the call for revision as a dangerous return to the status quo ante: an aggressive, warmonger Japan who deserved defeat and hatred from its victims during the war. The point, therefore, to retaining Article 9 is to preserve the pacifist identity and not risk a possible return to its bitter image overseas. This Japan has to believe that their pacifist and non-aggressive disposition would repel serious national security threats from other countries.

Juxtapose these two views and one will see that both opposing arguments revolve around the same realist lens of state-centeredness particularly when it comes to power and security. Aside from the fact that revision would give the LDP a lopsided favour over popular sentiments, increasing power through militarization would also be counterintuitive to Japan’s efforts of correcting historical wrongs and getting support from its emotionally-charged citizens and victims. More importantly, in both perspectives, the paradox presents itself with the harsh reality that if indeed Japan wanted to exercise its full sovereignty, this could be another instance of kowtowing to external demands rather than deciding on its own.

This is not to say that having the ‘Peace Constitution’, given its US-influenced origins, was a wrong decision. If anything else, this 1947 Constitution aligns Japan to international norms. It has actually saved the country from further enmity and damage as a result of the war. The point is, unlike the oft-compared Germany that openly acknowledge militaristic acts in the past with deep apologies for their victims, Japan is still in the process of admitting fault for its brutal war activities.

However, refusing to change the 1947 Constitution means that the government is unable to fulfill its responsibility of guaranteeing security of both its people and the international community, especially with the rattling from China and North Korea becoming hard to ignore, not to mention the potential of Japan to assume a leadership role in the region. In short, choosing to argue in the realist fashion would place Japan in a precarious situation with neither of the choices giving them the optimal result of achieving power and security.

What must then be considered is interpreting Article 9 not just a state security apparatus, but also an historical mnemonic that institutionalized Japanese pacifist identity by serving as the guiding principle of Japan’s domestic and international policies in the post-war era.

Collective memory of a nation is created to build political consensus on how the nation’s past is interpreted through elements of the present. The state can thus use collective memory to institutionalize an ‘imagined political community’ through historiography, mass communication and education. Manifestations of collective memory can be found in both formal and informal forms, such as laws and declarations in the former and museums or anecdotes on the other. Combined, they form a particular form of collective ‘national’ identity. And, in the efforts to forge a collective identity, how people remember historical events becomes the basis of the narratives from which they identify themselves apropos of the state. No other country would value collective memory more than Japan, where deep contestations over interpretations of history are still unresolved. 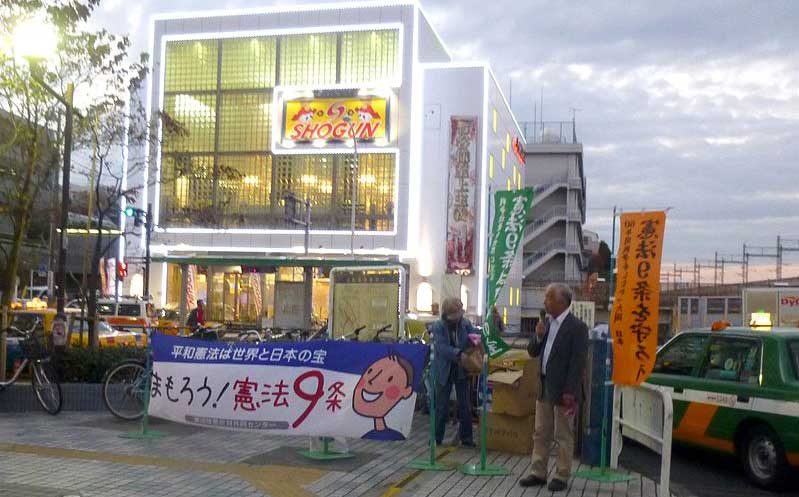 Demonstrators in favor of maintaining Article 9, near Tabata Station, Tokyo

Finding the Constitution’s Future in the Olympics

Just like Article 9, the Olympics maintains an important position in creating Japan’s anti-war state identity. It constitutes the collective memory that continues to serve as the basis of how people remember to make sense of their present. This path-dependence refuses to be ignored, especially now that Japan is going to host the 2020 Olymiad. The long preparations and the event itself are, as other public events and reminders in post-war Japan—from peace ceremonies, museums to narratives delivered by A-bomb survivors (hibakusha)—expressions that tell how history is to be remembered and will continually press an internalized importance among the citizens and the rest of the world.

What if this collective-memory-as-state-identity is that thing that keeps Japan’s enemies from actually attacking? How can the LDP government win over this collective memory, which it institutionalized and has gained more legitimacy over time than perhaps it originally intended? More importantly, what awaits the 2020 Olympics if the government pursues its plans of revising the 1947 Constitution? of collective memory if they are not aligned with the 1947 Constitution?

What the current support for the revising the “peace provision” sorely misses is the potential of collective memory as the most compelling basis of state legitimacy, and even security. Because collective memory has gone through the process of being owned by those who are part of the history, disregarding it in favour of a realistic response to the so-called demands of international politics can be perilous to Japan’s state identity. Since this process of shaping history through representational practices of collective memory is intimately related to how the state establishes its identity, it will be difficult for the government to revise Article 9 devoid of serious interrogation from both its citizens and the international community.

Ultimately, any attempt to revise Article 9 would not only derange Japan’s security situation, but more importantly, would dislodge practices of commemoration for the past 60 years as merely tokenistic. That would seriously fracture the very core of Japan’s state identity. After all, using the 1964 ‘infrastructure’ in 2020 is not just a matter of practicality—it is also the symbolic unification of Japanese past and present.