On November 23, 2013, a relatively obscure and benign security practice, which traces its origins to the early years of the Cold War, 1 made global headlines with China’s declaration of an Air Defense Identification Zone (ADIZ) over the East China Sea. 2 China’s imposition of reporting obligations on aircraft transiting airspace as far as 300 miles from China’s territorial waters triggered ominous warnings from Tokyo that China’s declaration risked setting off “unpredictable events”. 3 Although China argued its East China Sea ADIZ was necessitated by both security and air safety concerns, 4 it was China’s imposition of reporting requirements on all aircraft transiting the zone, and its inclusion of airspace above disputed territories within the ADIZ, that triggered immediate condemnation from neighboring states, including Japan and South Korea, along with a swift challenge by the United States, which flew two B52 strategic bombers through the contested ADIZ. 5

The subsequent weeks brought no immediate resolution to the conflict over China’s newly declared ADIZ, and 2013 ended with greater attention than ever being directed towards the growing conflict over East Asia’s airspace. Indeed, never before have the reporting obligations of aircraft generated so much public attention, concern, and outrage. Yet, despite the recent media focus on ADIZs, there remains little understanding of just what are ADIZs, or the relevant body of international law that limits the ability of states to interfere with air navigation in non-territorial airspace. With China arguing its ADIZ is consistent with international law, and existing state practice, and with Japan and the U.S. challenging the new ADIZ, an overview of the law and practice of ADIZs is urgently needed. This contribution aims provide a short introduction to ADIZs and will point out that the conflict over the East China Sea ADIZ is less about reporting and more about growing concerns over the emergent nexus between ADIZs and claims to sovereignty.

Air Defense Identification Zones are unilaterally declared designated areas of non-territorial airspace where states impose reporting obligations on civil and military aircraft for the purpose of national security. While some have argued that ADIZs, as unilateral declarations, do not violate international law, 6 Cuadra points out they can conflict with a core principle of public international air law: the freedom of air navigation in international airspace. Dutton, on the other hand, relies on U.S. ADIZ practices to argue the simple requirement to report, implied by an ADIZ, is not a violation of international law. 7 The core dispute on this matter gravitates around the question as to whether or not specific reporting regimes established through ADIZs constitute a restriction on air navigation in non-territorial airspace. 8 To be sure, relevant international conventions, such as the 1944 Convention on International Civil Aviation (the Chicago Convention) and the 1982 Convention on the Law of the Seas (UNCLOS), affirm a prohibition against unilateral attempts to restrict air navigation in airspace beyond a state’s territorial seas. 9 Even in the context of rights that can be derived from exclusive economic zones (EEZs), it is evident that airspace above an EEZ remains beyond the territorial airspace of states. 10

While public international air law, the lex specialis of airspace law, firmly embraces the principle of freedom of navigation in the skies above international waters, these same skies are not free of regulation. It is important to recall that reporting requirements for civilian aircraft are imposed through a global network of Flight Information Regions (FIRs). As Cuadra notes, the high seas, “[f]ar from being an unlimited expanse that one can traverse at will, subject only to the occasional requirement of a subjacent State, […] is a maze of highly regulated airways, air navigational aids, and “rules of the air.”” 11 Within FIRs aircraft are already required to file flight plans for navigational safety. 12 Thus, it is important to emphasize that beyond territorial airspace, international airspace is already regulated, and even U.S. military aircraft, on routine flights, comply with reporting procedures and make use of FIR services. 13 In the context of the current debate of over the East China Sea ADIZ, it is worth pointing out that Japan’s Fukuoka FIR administers some of the same airspace in which China has declared its ADIZ. 14 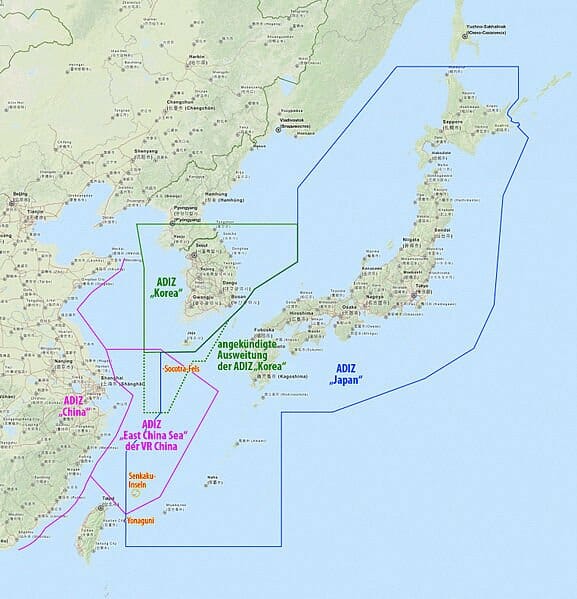 As mentioned at the outset, ADIZs can be viewed as an artifact of the Cold War. The United States was the first to declare an ADIZ in 1950 so as to provide early warning against a feared Soviet strategic air attack. However, much of the current confusion over the legality of ADIZs fails to appreciate the narrow obligations imposed by the U.S. ADIZ reporting regime. The U.S. Code of Federal Regulations defines Air Defense Identification Zones as “an area of airspace over land or water in which the ready identification, location, and control of civil aircraft is required in the interest of national security”. 15 For the U.S, ADIZs are solely a security measure, and thus do not aim to regulate air traffic within their respective patches of airspace. Therefore, the U.S. imposes its reporting obligation only upon aircraft en route to the U.S. The U.S. does not impose reporting obligations on aircraft simply transiting an ADIZ. In relation to ADIZs imposed by other nations, the U.S. does not recognize the right of states to impose obligations upon aircraft not en route to the state in question. 16  In fact, U.S. military aircraft are instructed not to comply with such reporting requirements imposed by other nations. 17

[ADIZ] is a zone that can extend in some cases up to 300 miles beyond the territorial sea. It’s established by some countries off their coasts for security reasons. When entering the zone, all aircraft are required to identify themselves, report flight plans, and inform ground control of their exact position. 18

Xinhua’s description of China’s ADIZ has one feature that stands out, the requirement all aircraft which enter the ADIZ identify themselves, report flight plans and inform ground control of their positions. It is in this respect China’s ADIZ differs from pre-existing ADIZs. Of course, this is more than a simple difference of opinion over reporting obligations. It is important to emphasize that the underlying motive behind Beijing’s November 23rd proclamation of an ADIZ departs from the original intent of Cold War ADIZs, early warning against a strategic air attack on sovereign territory. Indeed, it has been pointed out that for China, “reducing the risk of surprise attack cannot have been part of the equation” when deciding to establish its ADIZ. 19 In fact, Foreign Ministry spokesperson, Qin Gang, linked the ADIZ’s declaration to China’s territorial claim over the Senkaku/Daioyu Islands in a press conference on November 25, 2013. 20 Therefore, the wider reporting obligations imposed by China through its ADIZ underlines the fact China’s ADIZ was not declared out of security necessity, to defend sovereign territory against air attack, but rather it was established so as to demonstrate China’s administrative control over contested airspace.

Of course, the risk that states would make use of ADIZs to advance claims of sovereignty is not new. As early as 1977, Cuadra articulated these fears when noting, “the question naturally arises whether, when linked with resource recovery zones for fisheries and the seabed, these zones in the airspace may harden into claims of full territorial sovereignty”. 21 Cuadra’s early insight into the risks posed by ADIZs appears to be affirmed in the context of contemporary developments in the airspace above the East China Sea, where China, Japan and South Korea now maintain conflicting ADIZs. 22

The danger inherent in China’s November 2013 declaration, and reactions to it, are that contestations over sovereignty have entered a new forum in East Asia, that of airspace. With states drawing up unilaterally declared defense identification zones that can extended for hundreds of miles beyond territorial airspace, alongside growing fears that these zones will harden into claims of full sovereignty, a once benign security practice has rapidly evolved into a source of conflict over East Asia’s contested skies.